Is An Adderall Overdose Possible?

Because of these abilities, Adderall is commonly prescribed to treat attention-deficit/hyperactivity disorder (ADHD) as well as narcolepsy. Adderall is considered a schedule II controlled substance with a high potential for abuse.

It's also possible to overdose on Adderall—even accidentally—which in some cases can be lethal.

Can You Overdose on Adderall?

Yes, ingesting too much Adderall can have serious side effects, including an overdose that can lead to death. What's more, some people are more sensitive to stimulants than others, so the amount that could lead to an overdose varies from person to person.

Even a small amount of amphetamine could be fatal. Deaths have been recorded with as low a dose as 1.5 milligrams per kilogram (mg/kg) of weight.

An Adderall overdose involves excessive stimulation of the sympathetic nervous system—which is responsible for activating the fight-or-flight response when there’s a sign of danger.

Depending on the person and their motives, an overdose may be intentional or it could be accidental. It's also important to note that Adderall can be lethal to animals if ingested.

Symptoms of Adderall overdose can range from mild to severe and include the following:

What You Should Do in the Event of Adderall Overdose

If you suspect that you or someone you know has overdosed on Adderall, seek emergency treatment immediately. If you are in the United States, call the Poison Control Center at 1-800-222-1222 or call 911 right away if you or a loved one are in immediate danger.

Be prepared to provide the following information to the emergency responders and/or doctor:

Adderall increases alertness, attention, and energy by increasing the activity of dopamine, serotonin, and norepinephrine in the brain. The standard daily dose of Adderall is 2.5 mg to 60 mg daily.

Like most medications, Adderall can cause side effects, even when it’s taken in a low dose and only as prescribed. Common side effects of Adderall may include:

These side effects usually aren’t serious. However, if you experience side effects, it’s important to let your doctor know. Your physician may tell you how to reduce side effects, change your dose, or switch you to a different medication.

7 Tips for Preparing Yourself to Take ADHD Medication

Adderall may interact with some medications, so it's important to talk to your doctor about any medications you're taking prior to taking Adderall. This includes vitamins, over-the-counter medications, and nutritional supplements as well as any prescriptions.

Monoamine oxidase inhibitors (MAOIs), for example, can increase the effects of Adderall and increase the risk of overdose.

Meanwhile, taking medications that inhibit CYP2D6 (an enzyme involved in drug metabolism) while taking Adderall can increase the risk of serious side effects.

Adderall is a commonly abused prescription drug. Because it has been linked to enhanced cognitive function and academic performance, it's popular among high school and college students who are hoping to benefit from the drug's effects.

But non-medical use of Adderall has a high potential for abuse and dependency as well as numerous potential adverse effects.

Misuse of a prescription drug involves:

A 2016 study published in The Journal of Clinical Psychiatry found that non-medical use of Adderall by adults rose by 67% and emergency department visits involving Adderall went up by 156% between 2006 and 2011.

Researchers warn that the prevalence of Adderall misuse may be denied and underreported. For instance, a 2017 study published in Drug and Alcohol Dependence found that Adderall abuse was often underreported in surveys.

Meanwhile, a 2017 study published in Postgraduate Medicine found that 5% to 10% of high school students and 5% to 35% of college students misuse ADHD stimulants.

The problem is that many individuals don’t realize the short- and long-term side effects of the drug and how stimulants work. Adderall dependence and withdrawal can be dangerous and even cause suicidal thoughts.

Chronic abuse of Adderall may lead to symptoms such as:

Some people even report abusing Adderall in an effort to offset the effects of alcohol. Individuals who take Adderall may report not getting as drunk as they normally would. This practice can cause them to drink more alcohol, though, which can lead to serious impairments or even death from alcohol poisoning.

Treatment for an overdose may involve administering activated charcoal to help absorb the medication. You also may need to get your stomach pumped. In the case of serotonin syndrome, you may be given a medication to block serotonin.

Don't let fear about these treatments keep you from seeking help right away, though. The more quickly you get medical attention, the better the chances that medical personnel can effectively treat the overdose.

There are steps you can take to prevent yourself or someone you love from overdosing on Adderall, including:

Press Play for Advice On Recovery From Addiction

Hosted by Editor-in-Chief and therapist Amy Morin, LCSW, this episode of The Verywell Mind Podcast, featuring best-selling author Mallory Ervin, shares how overcome to addiction and live a full life. Click below to listen now.

When taken as prescribed, Adderall can be a safe and effective treatment for ADHD. If you have concerns that you or someone you love is misusing this prescription or is at risk for doing so, talk to your doctor about treatment options. Be sure to discuss what other medication you are taking to avoid potentially dangerous interactions.

How Stimulants Work to Reduce ADHD Symptoms
16 Sources
Verywell Mind uses only high-quality sources, including peer-reviewed studies, to support the facts within our articles. Read our editorial process to learn more about how we fact-check and keep our content accurate, reliable, and trustworthy.
Additional Reading 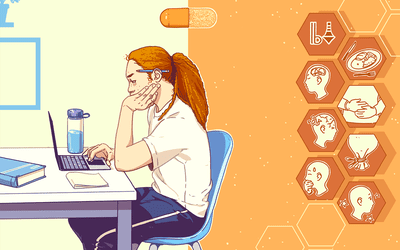