Recognizing Alcoholism as a Disease

One of the difficulties in recognizing alcoholism as a disease is it just plain doesn't seem like one. It doesn't look, sound, smell and it certainly doesn't act like a disease. To make matters worse, generally, it denies it exists and resists treatment.

Alcoholism has been recognized for many years by professional medical organizations as a primary, chronic, progressive, and sometimes fatal disease. The National Council on Alcoholism and Drug Dependence offers a detailed and complete definition of alcoholism, but probably the most simple way to describe it is a mental obsession that causes a physical compulsion to drink.

Mental obsession? Did you ever wake up in the morning with a song playing over and over in your head? It might have been a commercial jingle you heard on television or a song from the radio, but it kept playing ... and playing and playing.

Remember what that was like? No matter what you did, that silly tune kept on playing. You could try to whistle or sing another song or turn on the radio and listen to another tune, but the one in your head just kept on playing. Think about it. There was something going on in your mind that you didn't put there and, no matter how hard you tried, couldn't get out!

A mental obsession can be defined as a thought process over which you have no control.

Such is the nature of the disease of alcoholism. When the drinking "song" starts playing in the mind of an alcoholic, he is powerless. He didn't put the song there and the only way to get it to stop is to take another drink.

The problem is the alcoholic's mental obsession with alcohol is much more subtle than a song playing in his mind. In fact, he may not even know it's there. All he knows is he suddenly has an urge to take a drink—a physical compulsion to drink.

The Neurobiology of Alcoholism

In 2016, the U.S. Surgeon General issued a report, "Facing Addiction in America: The Surgeon General's Report on Alcohol, Drugs, and Health," which details the changes that take place in the regions of the brain of someone who is addicted in a section entitled, "The Neurobiology of Substance Use, Misuse, and Addiction."﻿﻿

According to the report, substance use disorders result from changes in the brain that occur with repeated use of alcohol or drugs. These changes take place in brain circuits that are involved in pleasure, learning, stress, decision making, and self-control.

The Reward System Affected by Repeated Use

When someone drinks alcohol—or takes drugs like opioids or cocaine—it produces a pleasurable surge of dopamine in the brain's basal ganglia, an area of the brain responsible for controlling reward and the ability to learn based on rewards.

With continued use of alcohol or drugs, the nerve cells in the basal ganglia "scale back" their sensitivity to dopamine, reducing alcohol's ability to produce the same "high" that it once produced. This is called building up a tolerance to alcohol and it causes drinkers to consume larger amounts to feel the same euphoria they once did.

These same dopamine neurotransmitters are also involved in the ability to feel pleasure from ordinary pursuits such as eating food, having sex, and engaging in social interaction.

When this reward system is disrupted by substance misuse or addiction, it can result in the person getting less and less enjoyment from other areas of life even when they are not drinking or using drugs, according to the Surgeon General's report.

Drinking Linked to Other Cues

Another change that chronic drinking can cause is to "train" the brain to associate the pleasure the person achieves by drinking with other "cues" in the drinker's life. The friends they drink with, the places they go to drink, the glass or container they drink from, and any rituals they may practice in connection with their drinking can all become associated with the pleasure they feel when drinking.

Because so many cues in their life are reminders of their drinking, it becomes more and more difficult for them to not think about drinking.

Warning Signs of an Alcohol or Drug Relapse

While the brain's dopamine transmitters drive us to seek pleasure, the stress neurotransmitters found in the extended amygdala region of the brain drive us to avoid pain and unpleasant experiences. Together they compel us to act.

Substance abuse, including alcohol use disorders, can disrupt the normal balance between these two basic drives, research has found.﻿﻿

Avoiding the Pain of Withdrawal

As alcohol use disorder progresses from mild to moderate to severe, the drinker experiences increasing distress whenever they are not drinking. Alcohol withdrawal symptoms can become very uncomfortable or painful.﻿﻿

Alcohol use progresses to the point that the only thing that can relieve the distress of withdrawal symptoms is drinking more alcohol.

At this stage, the person is no longer drinking to experience pleasure. In fact, drinking may not even bring any feeling of pleasure anymore. The drinker is drinking to avoid pain, not to get high.

The Cycle of Addiction

Alcoholics become no longer able to reach the high that they once experience because of their tolerance, but the lows they experience when not drinking become lower and lower. Other pursuits in life that once brought pleasure and balanced out the lows no longer do so at this point.

When the drinkers were still relatively healthy, they could control their impulse to drink because the judgment and decision-making circuits of their prefrontal cortex would balance out those impulses. But, their substance use has also disrupted their prefrontal circuits.

When that happens, research shows, alcoholics, and addicts have a reduced ability to control their powerful impulse to use even when they are aware that stopping is in their best interest. At this point, their reward system has become pathological, or in other words, diseased.﻿﻿

The Surgeon General's report on the neurobiology of substance abuse, explains the alcoholic's inability to make healthy decisions this way:﻿﻿

"This explains why substance use disorders are said to involve compromised self-control," the report said. "It is not a complete loss of autonomy—addicted individuals are still accountable for their actions, but they are much less able to override the powerful drive to seek relief from withdrawal provided by alcohol or drugs."

"At every turn, people with addictions who try to quit find their resolve challenged. Even if they can resist drug or alcohol use for a while, at some point the constant craving triggered by the many cues in their life may erode their resolve, resulting in a return to substance use, or relapse," said the report.

Compounding the problem is the progressive nature of the disease. In its early stages, taking one or two drinks may be all it takes to get the "song" to stop. But soon it takes six or seven and later maybe ten or twelve. Somewhere down the road, the only time the song stops is when he passes out.

The progression of the disease is so subtle and usually takes place over such an extended period of time, that even the alcoholic himself failed to notice the point at which he lost control — and alcohol took over — his life.

No wonder denial is an almost universal symptom of the disease. For those who have come to the realization that they do have a problem, help may be as close as the white pages of the telephone directory. But for those who need help and do not want it, there is hope.

Do you have a drinking problem? You may want to take the Alcohol Abuse Screening Quiz to see how you compare.

How to Control Your Alcohol Intake
2 Sources
Verywell Mind uses only high-quality sources, including peer-reviewed studies, to support the facts within our articles. Read our editorial process to learn more about how we fact-check and keep our content accurate, reliable, and trustworthy. 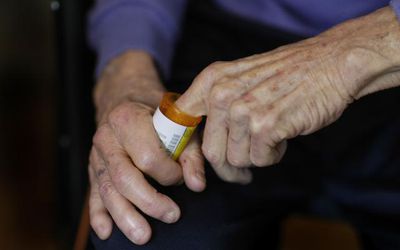