How Buspirone Can Help Treat Anxiety

BuSpar (buspirone) is a medication used to treat generalized anxiety disorder (GAD), and its effectiveness has been well established for this purpose. This anti-anxiety drug was originally approved by the Food and Drug Administration (FDA) in 1986.

While the name brand BuSpar has been discontinued, the medication is still available in its generic form (buspirone). Since many people still use the brand name BuSpar and the generic name buspirone interchangeably, this article will use both terms to refer to the medication.

Buspirone is typically used to help treat generalized anxiety disorder (GAD). Some researchers have set out to see if it can help people with other types of anxiety, such as social anxiety disorder (SAD). So far, it appears to have minimal effects.

For instance, one review of studies involving medication-based anxiety treatments noted that buspirone had not demonstrated effectiveness for social anxiety disorder. Plus, the doses needed to possibly make it more effective would also increase the drug's side effects, limiting its use.

It is often less effective for disorders that involve episodes of severe anxiety, such as obsessive-compulsive disorder (OCD) and panic disorder.

How BuSpar Works (Method of Action)

Buspirone is from the azapirone class of medications, which includes other anxiolytic (anti-anxiety) and antipsychotic medications. It is most often prescribed for generalized anxiety disorder.

BuSpar impacts neurotransmitters in the brain, such as serotonin and dopamine. Specifically, it is a serotonin receptor agonist, which means that it increases action at serotonin receptors in your brain. This, in turn, helps to alleviate anxiety.

Buspirone is commonly used as an add-on to other medications—such as selective serotonin reuptake inhibitors (SSIRs)—for the treatment of depression or anxiety, rather than a first-line treatment. BuSpar may also be prescribed if other medications have been ineffective or resulted in too many side effects.

Buspirone can be taken with food or without, but it must be taken consistently—usually two or three times daily.

Buspirone tablets come in a variety of doses, ranging from 5 mg to 30 mg each. Additionally, both the 5 mg and 10 mg tablets are scored so they can easily be split in half, dropping the lowest available dose per tablet to 2.5 mg.

The maximum daily dose is 60 mg. However, most patients respond to a dose in the range of 15 mg to 30 mg. This dose can also be increased by 5 mg every 2 to 3 days if needed. Your prescribing doctor will determine the appropriate dosage for you.

BuSpar is slow-acting, so it may take a few weeks to feel the effects. Your prescribing doctor will evaluate your situation regularly, including how you respond to the medication, to determine the optimal length of time that you should take BuSpar.

Typically, the medication is taken for several months up to a year. When your doctor decides that you should stop taking BuSpar, the dose will gradually be reduced to help avoid the potential effects of withdrawal.

If You Miss a Dose

If you miss a dose of buspirone, take it as soon as you remember. The one exception is if it's almost time to take the next dose. In that case, skip the missed dose (don't try to double up), and resume your normal schedule beginning with the upcoming dose.

When taking buspirone, you want to avoid drinking a lot of grapefruit juice. The reason for this is that grapefruit juice can change the way the drug moves through the body, potentially increasing the amount of buspirone absorbed.

In addition, it is best to avoid using alcohol while taking BuSpar. Mixing alcohol and BuSpar can lead to increased drowsiness and feeling lightheaded. More severe implications of this combination include problems with muscle control, memory, and breathing.

BuSpar (buspirone hydrochloride) should not be taken by those with hypersensitivity to the drug. Drug hypersensitivity refers to immune-mediated reactions to drugs, with symptoms ranging from mild to severe. In cases of hypersensitivity, your prescribing doctor will discontinue the medication treatment.

Buspar should also be used cautiously by people with compromised liver function or pre-existing medical conditions. Because removal of buspirone is mediated by liver enzymes, there may be increased concentrations of buspirone in the blood if the liver is not functioning normally. In addition, as buspirone can affect blood glucose levels, this may be problematic for people with diabetes.

Buspar is not recommended for people who are breastfeeding as there is evidence to suggest it may be secreted into breast milk. Its safety during pregnancy has also not been adequately studied.

BuSpar can potentially interact with numerous medications. The use of buspirone with monoamine oxidase inhibitors (MAOIs), for instance, can result in increased blood pressure.

For these reasons, it is important that your prescribing doctor is aware of all medications that you are taking before being prescribed BuSpar. This includes vitamins, nutritional supplements, and herbal products.

Side Effects of BuSpar

A range of adverse effects is possible when taking BuSpar—especially within the first few weeks of taking the drug. Some of the most common side effects of buspirone include:

Dizziness is perhaps the most common, appearing in more than 10% of people taking buspirone. Although, this effect may lessen after a few weeks.

Other more rare but potentially serious adverse effects of buspirone include:

If you experience any of these effects after taking buspirone, seek medical attention immediately and alert your prescribing doctor.

Although BuSpar is less sedating than many other anxiety medications, use caution if driving, operating machinery, or participating in hazardous activities while taking BuSpar. There is little risk of physical or psychological dependence on BuSpar, and the risk of overdose is low.

If BuSpar does not alleviate your anxiety or you are not able to take it due to a medical condition or medication interaction, your doctor can determine the best alternative medication or form of treatment for your situation. These might include benzodiazepines, SSRIs, or therapy such as cognitive behavioral therapy (CBT).

While these medications also treat anxiety, their mechanism of action differs. For example, where buspirone acts on serotonin receptors in the brain, Xanax affects GABA receptors.

If you have been prescribed buspirone for anxiety, be sure to follow your prescribing doctor's instructions and report any ill effects. If you find the medication is not making a difference in your symptoms after several weeks, it might be worth asking your doctor whether another medication would be a better choice for you. 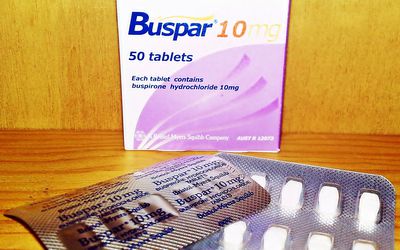 Buspar for Anxiety With Bipolar Disorder