Addiction
Nicotine Use
After You Quit

If you are applying for a new job or looking for life or health insurance, don't be surprised if you have to take a drug test, which may include testing for nicotine. This makes it important to know how long nicotine stays in your system, which can vary from 24 hours to 90 days based on several factors (which we will discuss) and the type of test used.

In fact, smoke-free hiring practices have become increasingly common in the workplace. Depending on where you live, you may even legally be denied a job due to your nicotine habits.

Nicotine is a highly addictive substance found in all tobacco products, including cigarettes, pipes, cigars, chewing tobacco, and snuff. E-cigarettes and vapes contain nicotine as well. While nicotine is not considered a controlled substance, it is illegal to sell tobacco products to anyone under the age of 18 in the United States, with some states raising the minimum age to 21.

Your body breaks nicotine down into many chemicals, including cotinine, which can be detected in certain drug tests. Cotinine is only found in your body if you have processed nicotine and, in general, stays in the body longer than nicotine itself.

Nicotine acts quickly in the body. After taking a puff from your cigarette, the substance enters the bloodstream and makes it to the brain within 20 seconds.

The amount of nicotine that enters the body varies based on how the drug is administered. For instance, chewing or snorting nicotine-containing products can cause more of the substance to be released than if it is smoked.

Nicotine is a stimulant. After it's taken, people quickly experience a surge in adrenaline that causes blood pressure and heart rate to go up. Even though the substance actually increases central nervous system activity, smokers often experience paradoxical feelings of relaxation.

Nicotine also increases the levels of a brain chemical called dopamine. This can improve mood and increase feelings of pleasure.

How Long Does Nicotine Last?

Nicotine has a half-life of about two hours. A drug's half-life is the amount of time it takes for half of the dosage administered to be eliminated from the body.

When nicotine is smoked as a cigarette or inhaled from another tobacco product, it is mostly absorbed through the lungs. Less often, nicotine is absorbed through mouth and throat membranes. If you chew tobacco or use nicotine gum, lozenges, or patches, nicotine can also be absorbed in your gastrointestinal tract or skin.

Nicotine is mainly metabolized in the liver, but also in the lungs and kidneys. It is primarily excreted by the kidneys via urine, with some nicotine being excreted in the feces. Nicotine can also be found in saliva and hair.

As your body metabolizes nicotine, liver enzymes break this drug down into metabolites that include cotinine. Nicotine tests usually look for cotinine rather than nicotine itself.

The amount of cotinine in your urine will vary depending on the amount and frequency of nicotine use. On average, nicotine shows in the urine for about three days. Although, regular smokers may have detectable levels for as long as 20 days. Urine tests can be done at home or in a lab, with results returned within 24 hours to five days.

Nicotine shows up in blood tests, as do its metabolites, including cotinine and anabasine. Nicotine itself may be present in the blood for only 48 hours, while cotinine may be detectable for up to three weeks. After blood is drawn in a lab, results can take from two to 10 days.

Nicotine stays in your saliva for about 24 hours, making it detectable with saliva tests taken during this time. Cotinine can be detected for up to seven days after it was last used or up to 14 days in heavy smokers. To perform this test, a technician swabs the inside of your mouth and tests oral fluids for nicotine. Results can take 24 to 72 hours.

Dry mouth or excessive salivation are two issues that can sometimes pose problems with collecting a saliva sample.

As with other substances, hair follicle testing can detect nicotine for much longer periods of time. This method tends to be less common, however, because it is usually more expensive. The test requires the removal of a small amount of hair that is tested for repeated nicotine use over the last 90 days. Results typically take one to five days.

A compound called thiocyanate—which is found in some medications and foods such as broccoli, garlic, radishes, almonds, and cabbage—can result in a false positive blood test result. Vegetarians may have elevated levels of this substance in their blood due to increased consumption of thiocyanate-containing foods.

Exposure to secondhand smoke is usually not enough to trigger a false positive result. Although, being exposed to frequent or very high levels of secondhand smoke may cause someone to test positive for nicotine use.

One study involving 25 children who were living with a person who smokes found that all but one of the kids had a detectable cotinine level, with all of the children having a detectable level of nicotine on their hands.

How long nicotine appears in your system at a detectable level depends largely on the type of test being used. And since each person's body processes nicotine differently, it is nearly impossible to determine a timeframe of detection with 100% confidence.

Factors that can affect how quickly your body gets nicotine out of your system include:

Smoking vs. Vaping vs. Chewing

How nicotine is administered may have an impact on how much of it is delivered. One study that compared nicotine doses between heavy smokers and e-cigarette users found that vaping devices deliver nicotine at slightly lower levels than cigarettes.

Chew and dip tobacco, on the other hand, contains higher levels of nicotine than cigarettes. The exact amount absorbed (and therefore needs to be eliminated) can depend on the brand of tobacco, the acidity level of the product, and the amount chewed. Blood serum levels are about the same when comparing smokeless tobacco use to that of cigarettes.

How Nicotine Affects Your Body

How to Get Nicotine Out of Your System

The first step in getting nicotine out of your system and starting to detox from this substance is to completely stop using all products that contain it. The longer you keep using tobacco products, the longer the substance can be detected in your body.

Once you stop using nicotine, there are some steps you can take that may speed up how quickly the drug is excreted from your system.

You may see products and herbal supplements marketed to speed up the nicotine elimination process. However, none of these have been verified or approved by the Food and Drug Administration (FDA).

Most nicotine poisoning cases have traditionally involved young children who got their hands on nicotine gum or patches. Although most cases are still in kids, adult cases are also now being reported more often due to e-cigarette use.

A spill of electronic nicotine solution (e-juice) can cause nicotine to be absorbed into the skin, which can also lead to poisoning.

If you are worried about whether nicotine will show up in a drug test, it might be the perfect time to get serious about quitting. While there are no easy, pain-free ways to kick your nicotine habit, there are plenty of resources to help you develop a solid smoking cessation plan.

Because nicotine can lead to physical and psychological dependence, stopping your use of the substance can result in withdrawal. Nicotine withdrawal symptoms may include:

These symptoms can be intense at first but decline in severity after three to five days. There are a number of smoking cessation treatments that can help you get through the withdrawal period and improve long-term abstinence. Nicotine-replacement therapy, such as the nicotine patch, can help you slowly reduce your nicotine intake and ease withdrawal symptoms.

Talk to your doctor for advice and assistance if you are ready to give up tobacco. You can also visit Smokefree.gov for smoking cessation programs, apps, and other resources. 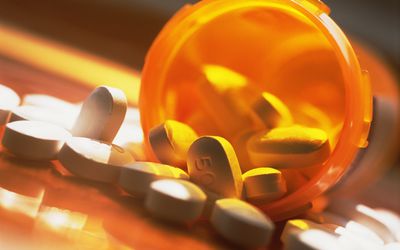