Versed Is Used for Pre-Anesthesia Sedation

Learn about our Medical Review Board
Fact checked
Verywell Mind content is rigorously reviewed by a team of qualified and experienced fact checkers. Fact checkers review articles for factual accuracy, relevance, and timeliness. We rely on the most current and reputable sources, which are cited in the text and listed at the bottom of each article. Content is fact checked after it has been edited and before publication. Learn more.
by Andrea Rice
Table of Contents
View All
Table of Contents

Versed (midazolam) used for pre-anesthesia sedation and for procedural sedation for children and adults. It is often used for uncomfortable procedures such as colonoscopies because it produces memory impairment.

Versed is in a class of drugs called benzodiazepines, which are central nervous system depressants and Schedule IV controlled substances.

When combined with alcohol or other depressants, or when taken in large dosages, Versed can cause a loss of consciousness and respiratory failure. So, it's important to know how long it remains in your system to avoid dangerous drug interactions and potential overdoses.

Urine: Up to two days

There are several ways Versed can be administered before anesthesia. A patient must always be monitored for breathing and heart function due to associated risks. Versed is administered by medical professionals in a hospital, day surgery clinic, or doctor's office.

Versed can be given as an injection, by tablet, or in a syrup. How Versed is taken will determine how fast it takes effect. In adults, injection or IV takes effect in about 15 minutes, with maximum effect in 30 to 60 minutes, and lasts around 2 hours (though recovery can take up to 6 hours in some cases). As a syrup, the effects of Versed in children are seen in 10 minutes and last for about 45 minutes.

The cognitive effects of Versed given pre-anesthesia can last longer than its sedative effects. Plan your schedule so you won't be doing any tasks that require coordination and concentration after you have been given Versed.

You won't be allowed to drive yourself home after Versed is administered for a procedure, and you'll need to take the day off of work.

How Long Does Versed Last?

The half-life of Versed, or how long it takes for half of the drug to leave your system, is roughly 1.8 to 6.4 hours—or an average of about 3 hours.

Midazolam, the active ingredient in Versed, is metabolized by the liver and gut before it is eliminated in the urine. Versed (midazolam) can be detected in blood and urine tests for prescription drugs and has a urine detection window of 1 to 2 days.

If you will be taking any such test, be sure to inform the testing laboratory that you have had Versed administered before anesthesia so the test can be interpreted correctly.

How long it takes your body to fully eliminate Versed depends on a number of factors, including age, liver function, and any other medications that were administered or that you have been taking.

How to Get Versed Out of Your System

The only way to get Versed out of your system is to stop taking it and allow your body time to process and eliminate it. Since Versed is a surgical anesthetic, it is not a drug that is continuously used and risks building up in your system.

Because Versed is a central nervous system depressant, there is a risk of death if an overdose occurs. Symptoms of an overdose of Versed include the following:﻿﻿

If you experience any of the following serious side effects that you think may be related to Versed, contact your doctor.

It is important to not drink alcohol or take any other medications that depress your nervous system for 24 hours after you have been administered Versed pre-anesthesia. Be sure to tell your doctor about all the medications, vitamins, supplements, and herbal products that you're taking prior to your surgery or procedure. Some of these substances can cause serious interactions, including: 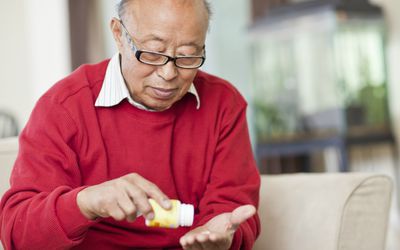