When people hear the term "dabbing," they might initially think of the dance move that is believed to have originated in the Atlanta rap scene and was later popularized by football star, Cam Newton, who made "the dab" his signature touchdown celebration.

But, in marijuana culture, dabbing is a slang term that refers to the process of consuming high concentrations of tetrahydrocannabinol (THC), the psychoactive chemical found in marijuana. Despite the dangers associated with the practice, it is growing in popularity—especially among teens.

This article covers what dabs are, what's in them, how dabbing works, and the potentially dangerous side effects.

Dabs—also referred to as wax, shatter, amber, honeycomb, or budder—are concentrated versions of butane hash oil (BHO) which contains highly-concentrated levels of THC. This concentrated substance is produced through a chemical process using butane oil to extract the oils from the cannabis.

Research suggests that dabs or BHO can have a THC concentration of 80% in comparison to traditional cannabis, which has a concentration of about 10% to 15% THC. In fact, at a minimum, dabs are as much as four times stronger than a joint. Plus, people who dab experience an intense high all at once rather than the high gradually building over time.

Dabs are made by pouring butane over marijuana. This process extracts THC from the marijuana plant and dissolves it into the butane leaving a gummy, somewhat solid product that contains high amounts of THC.

It depends. Butane hash oil is illegal in some states, so you may be violating state law if you use it for dabbing (or if you possess more than the legal limit).

It's also worth noting that under federal law, marijuana is still a Schedule I substance, which means you can't legally manufacture or distribute marijuana (or related substances, like dabs) without a license.

One review suggests that Americans have been dabbing at least since the 1960s. Soldiers in the Vietnam conflict extracted THC into a liquid concentrate, using acetone or petrol as solvents. (Today, butane is the most commonly used solvent used to make dabs.) They smoked the concentrate by rolling it in paper, sometimes combining it with tobacco.

Some researchers also note that "community magazines," like High Times contributed to the widespread popularity of BHO concentrates. The High Times described BHO concentrate as "an easier method of utilizing once-wasted parts of the cannabis plant" and also noted that BHO can provide pain relief.

Although marijuana is commonly consumed by smoking joints and sometimes through vape pens, dabs are heated to an extremely high temperature and then inhaled. A specifically-designed glass bong commonly called an "oil rig" is used.

The dab is placed on an attached "nail" and a blow torch is used to heat the wax, which produces a vapor that can be inhaled. This type of ingestion means the effects of dabbing are felt immediately.

People can also dab by placing hash oil in vaping devices. This method is especially common among teens because it allows them to use hash oil with a very low chance of being caught because there is no smoke or distinct smell. Consequently, they may dab in public places, including at school.

You may have heard people compare dabbing with a bong to dabbing using vaping devices like cartridges (commonly referred to as carts). With a bong, there is less control in how much vapor you breathe in, whereas a cartridge delivers smaller and more consistent doses of vapor each time.

Although the process of dabbing is not new, it is growing in popularity in the United States. Researchers attribute this growth to the commercial production of medical marijuana and the legalization of it in numerous states. Both of these factors have led to an increase in instructional videos online as well as a greater social media presence. Consequently, it is becoming more and more popular.

Although some people believe that dabbing is a safer method of ingesting cannabis because it is so highly concentrated and a person only has to take one hit to get high, that couldn't be further from the truth. Simply put, there is no completely safe level of drug use. Any drug—regardless of its purpose—carries some risk. Dabs are no exception.

Dabbing Is Not the Same as Smoking

In fact, one study found that dabbing can lead to higher tolerance and worse withdrawal symptoms than more traditional marijuana use alone. What's more, it is dangerous for people to assume that dabbing carries the same level of risk as smoking marijuana.

Dabbing is linked with a number of dangerous side effects like a rapid heartbeat, blackouts, crawling sensations on the skin, loss of consciousness, and psychotic symptoms such as paranoia and hallucinations.

Is Dabbing Safer Than Smoking Marijuana?

While vapor is technically less harmful to the lungs than smoke, vaping and dabbing still aren't safe. Dabbing may expose people to elevated levels of toxins (like carcinogenic compounds). The higher the temperature the substance is exposed to, the more carcinogens, toxins, and potential irritants are produced.

The temperatures required for dabbing put people at a greater risk than other methods. As a result, people who dab are being exposed to harmful chemicals including methacrolein and benzene. Likewise, another study found that more than 80% of marijuana extracts are contaminated with poisonous solvents and pesticides.

Another danger of dabbing is the production. Making hash oil is actually one of the riskiest aspects of dabbing. Dabs are made by blasting butane or lighter fluid—a highly flammable and unstable substance—through the marijuana plant. Adding heat to these substances is extremely dangerous.

What's more, after the process has been completed, any remaining butane remains in the room as gas. As a result, the smallest spark—even one produced by static electricity—can cause an explosion. The risks are similar to that of a meth lab.

Consequently, there have been increasing reports of houses, apartment buildings, and other structures exploding during the extraction process. When this happens, the people involved are at risk of severe burns requiring skin grafts or reconstructive surgery, broken bones, and even death.

Can You Overdose on Dabs?

It is possible to overdose on dabs. However, an overdose is likely not fatal. It's worth noting, though, that more research is needed on the harmful effects of dabbing and how likely a person is to overdose.

If you do overdose on dabs, you will likely experience some of the following side effects:

The bottom line is that dabbing is a potentially dangerous process that comes with real risks to a person's health and overall well-being. It also is very appealing to teens and young adults. For this reason, parents and educators need to talk to young people about the risks associated with dabbing.

If you or a loved one is dabbing, it's advisable to seek professional help. You can start with a primary care doctor. They may refer you to a mental health professional who can help address substance use and teach healthier coping mechanisms. 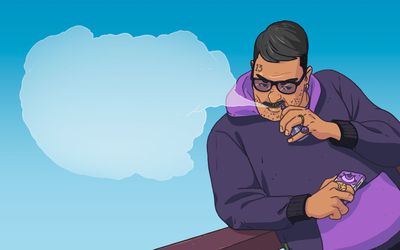