Neurons are the basic building blocks of the nervous system. These specialized cells are the information-processing units of the brain responsible for receiving and transmitting information. Each part of the neuron plays a role in communicating information throughout the body.

Neurons carry messages throughout the body, including sensory information from external stimuli and signals from the brain to different muscle groups in the body. In order to understand exactly how a neuron works, it is important to look at each individual part of the neuron. The unique structures of the neuron allow it to receive and transmit signals to other neurons as well as other types of cells.

Dendrites are tree-like extensions at the beginning of a neuron that help increase the surface area of the cell body. These tiny protrusions receive information from other neurons and transmit electrical stimulation to the soma. Dendrites are also covered with synapses.

Most neurons possess these branch-like extensions that extend outward away from the cell body. These dendrites then receive chemical signals from other neurons, which are then converted into electrical impulses that are transmitted toward the cell body.

Some neurons have very small, short dendrites, while other cells possess very long ones. The neurons of the central nervous systems have very long and complex dendrites that then receive signals from as many as a thousand other neurons.

If the electrical impulses transmitted inward toward the cell body are large enough, they will generate an action potential. This results in the signal being transmitted down the axon.​

The soma, or cell body, is where the signals from the dendrites are joined and passed on. The soma and the nucleus do not play an active role in the transmission of the neural signal. Instead, these two structures serve to maintain the cell and keep the neuron functional.﻿﻿

Think of the cell body as a small factory that fuels the neuron.

The soma produces the proteins that the other parts of the neuron, including the dendrites, axons, and synapses, need to function properly.

The support structures of the cell include mitochondria, which provide energy for the cell, and the Golgi apparatus, which packages products created by the cell and dispatches them to various locations inside and outside the cell.

The axon hillock is located at the end of the soma and controls the firing of the neuron. If the total strength of the signal exceeds the threshold limit of the axon hillock, the structure will fire a signal (known as an action potential) down the axon.

The axon hillock acts as something of a manager, summing the total inhibitory and excitatory signals. If the sum of these signals exceeds a certain threshold, the action potential will be triggered and an electrical signal will then be transmitted down the axon away from the cell body. This action potential is caused by changes in ion channels which are affected by changes in polarization.

When a signal is received by the cell, it causes sodium ions to enter the cell and reduce the polarization. If the axon hillock is depolarized to a certain threshold, an action potential will fire and transmit the electrical signal down the axon to the synapses.

It is important to note that the action potential is an all-or-nothing process and that signals are not partially transmitted. The neurons either fire or they do not.

The axon is the elongated fiber that extends from the cell body to the terminal endings and transmits the neural signal. The larger the diameter of the axon, the faster it transmits information.

Some axons are covered with a fatty substance called myelin that acts as an insulator. These myelinated axons transmit information much faster than other neurons.

The myelin surrounding the neurons protects the axon and aids in the speed of transmission. The myelin sheath is broken up by points known as the nodes of Ranvier or myelin sheath gaps. Electrical impulses are able to jump from one node to the next, which plays a role in speeding up the transmission of the signal.

Axons connect with other cells in the body including other neurons, muscle cells, and organs. These connections occur at junctions known as synapses.

The synapses allow electrical and chemical messages to be transmitted from the neuron to the other cells in the body.

Neurons serve as basic building blocks of the nervous system and are responsible for communicating messages throughout the body.

Knowing more about the different parts of the neuron can help you to better understand how these important structures function as well as how different problems, such as diseases that impact axon myelination, might impact how messages are communicated throughout the body. 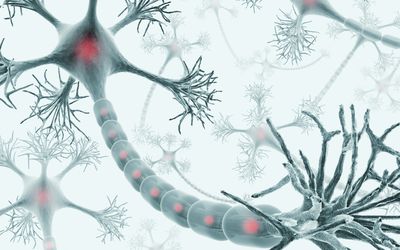 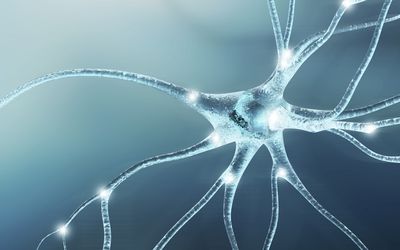 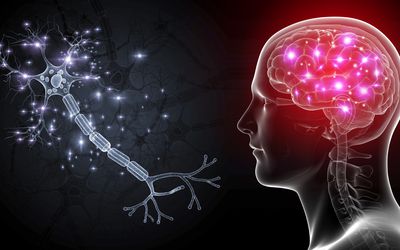 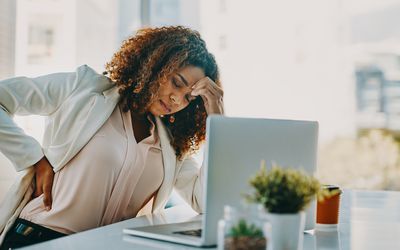 Can Stress Cause Back Pain?