The idea of taking medication to treat psychiatric conditions such as depression has garnered quite a bit of controversy in comparison to other areas of medicine. Many people are vocal about whether antidepressants are good or bad on various media platforms and have strong opinions on either side of the debate, but very few are neutral.

Some feel that there are too many side effects or that they don’t work or that others will judge them if they are taking antidepressants. Others fear they will become addicted to them or that they will change their personality.

The choice to take antidepressants or not is indeed a pretty big one. Doing your research and having one or more meaningful discussions with your doctor is the best place to start. It’s always a good idea to decide based on real data instead of rumors or a depiction of antidepressants in the media.

Below are some pros and cons of taking antidepressants based on years of clinical research and understanding what patients hope for and what they worry about when making this very personal decision.

Pros and Cons of Antidepressants

Below are some of the common benefits of taking antidepressants.

There are many lifestyle changes that could be helpful in managing depressive symptoms. Things such as exercise, hobbies and a balanced diet are known to be beneficial in dealing with mental illness.

The catch is, however, that a depressed person cannot always get motivated enough to initiate these lifestyle adjustments. Antidepressants can provide a running start to implementation of a healthier way of living.

If someone does exercise their option to take medication, ideally that will be part of a wholistic approach to their wellness that includes self-care and attention to physical health. One doesn’t replace the other.

Antidepressants have been proven to be safe. The word safe may feel vague but with respect to antidepressants, this refers to:﻿﻿

There are studies demonstrating that antidepressants can even be safe for certain vulnerable populations such as pregnant women,﻿﻿ organ transplant recipients,﻿﻿ those with active tumors and in those who've recently had a stroke.﻿﻿

Whenever a drug is being tested for efficacy, it is tested against a placebo. A placebo has no active ingredients but might produce an effect because some patients respond to just the suggestion of treatment. Any benefits of a medication has to surpass that of the “placebo effect” in order to be declared effective.

Antidepressants are proven to be more effective than a placebo with respect to relieving depressive symptoms and shortening the length of a depressive episode.

As this class of medication has been in use for over 40 years, there is a plethora of information about how they affect the body. Since the 1980’s, several large-scale studies have compared these medications against placebo and against each other as new ones come on the market. Of note, very little information is available regarding a hierarchy of efficacy among antidepressants.﻿﻿

The fact that antidepressants are effective is a major pro. Depression is a terrible condition that can involve symptoms such as sleep disturbances, hopelessness, difficulty concentrating, lethargy and suicidal thoughts.

A depressive episode can undermine close relationships, interrupt lives and increase the likelihood of risky behaviors and poor choices. It can severely limit psychosocial functioning and diminish your quality of life.

In 2008, the World Health Organization (WHO) ranked major depression as the third cause of burden of disease worldwide and projected that the disease will rank first by 2030.﻿﻿

When deciding if antidepressants are right for you, it's important to also get an understanding of the possible disadvantages of taking them.

A few of the more common side effects of antidepressants include:

Many people don’t have side effects at all or the side effects go away as the body adjusts to the medication. An ongoing open dialogue with your prescriber about your experience is a must, so make sure that you feel that your concerns are being heard from the start.

A thoughtful consideration of the side effects of antidepressants can only effectively be done by weighing those side effects against the effect depression is having on your life.

Some patients who have side effects decide that the benefits they are getting from the medication is worth it. So, they are willing to put up with things such as dry mouth, for example, and make sure they have plenty of water on hand, in exchange for living without depression.

Antidepressants don’t work right away. Of course, it depends on the medication and the individual, but benefits can start as soon as a few days after taking your first dose.

Most will experience some benefits within two to four weeks. A trial of an antidepressant isn’t considered to technically be a failure unless you have felt no improvements after six weeks on a therapeutic dose.

Some medications will be introduced at a low dose to allow your body to adjust and then that dose will be slowly titrated upwards. You and your doctor can discuss whether it is realistic to expect benefits before getting to that dosage.

We try to avoid being swayed by stigma when making major life decisions. However, one should be honest with themselves regarding the potential for considerable stigma and self-stigma involved with being on antidepressants and how it may affect their behavior.

Some individuals might feel so much ambivalence about taking medication that they skip doses or won’t disclose their use of antidepressants to other providers who may need a complete health history.

You also want to be comfortable enough with the idea of taking medications so that you can commit to it for approximately six months, as this is the usual recommendation.

Some Antidepressants May Not Work For You

At times, a medication is either ineffective or doesn’t result in the full desired effect. In this case, you and your doctor can work on a plan which might be a new medication, or in some cases, an additional medication.

Currently, there is no great way to predict in advance which medication might work for a given individual with just a standard interview.

However, there appears to be a genetic component to antidepressant response. Some companies offer genetic testing which may be helpful in determining the best choice for you.

Your prescriber may also inquire about other relatives with a depression history and what medications worked for them to help guide her prescribing.

Making the commitment to take an antidepressant is a major decision. Although there are so many great resources on the internet for independently doing research, make sure to hear your options from a medical professional.

You can get a rundown from your doctor of treatment options that might be right for you without making a commitment, so don’t be afraid of getting informed.

How Deep Brain Stimulation Is Used to Treat Depression
6 Sources
Verywell Mind uses only high-quality sources, including peer-reviewed studies, to support the facts within our articles. Read our editorial process to learn more about how we fact-check and keep our content accurate, reliable, and trustworthy. 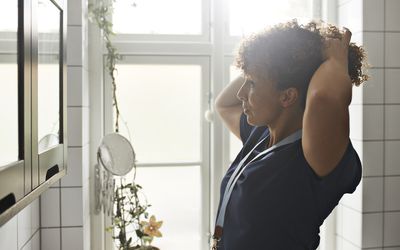