The term CisHet refers to a gender identity as well as a sexual identity. This two-part identity means that a person is both cisgender and heterosexual.

A CisHet person identifies with the gender they were assigned at birth, and they choose romantic partners of the opposite sex.

What Does It Mean to Be Cisgender?

To be cisgender means that you identify with the gender you were assigned at birth. If you are cisgender, which is often shortened in discussion to "cis," chances are you have not experienced gender dysphoria, where you feel unaligned with your assigned gender.

People who identify as cisgender may never have to think at all about their gender identity. That is a privilege.

People who are gender non-conforming, transgender, or of another marginalized gender identity often have a much more complex journey in relation to their gender identity, and face much more discrimination than cis people do.

What Does It Mean to Be Heterosexual?

The word heterosexual is often shortened to "hetero," or in the case of the word CisHet, to "het." It's also used synonymously with the word "straight."

Just like being cis, many hetero people don't ever think about being heterosexual at all. This is also a privilege. People who are queer face more discrimination throughout their lives than people who are heterosexual do.

The History of Gender and Sexual Identities

We may have only started talking more freely about gender identity and sexual identity in the 1900s, but that doesn't mean it's a new topic.

Throughout history, societies have had people in them who didn't fit into male/female binary categories, or who didn't partner only with members of the opposite sex. One example of this is the Two-Spirit identity in Native American culture. The words "heterosexual" and "homosexual" weren't coined until the late 1800s, by Karl Maria Kerbeny.

In more recent years, advocacy groups for marginalized people have made those who aren't in a sexual or gender minority more aware of the discrimination that LGBTQIA+ people face. This has led many to believe that those groups of people didn't exist prior. In reality, LGBTQIA+ people have always existed.

The Difference Between Gender and Sexuality

Gender and sexuality are often conflated. This happens often by people who are CisHet, because they have a sexuality and a gender identity that is in the majority.

Along with being in the majority, CisHet people have societal privileges, such as not being subjected to gender- or sexuality-based discrimination, that allows them to generally not have to think about their sexual orientation or gender identity.

In reality, gender and sexuality are entirely different things. A trans person might consider themself heterosexual if they partner with people of the opposite gender, for example. You can be a minority in regards to either sexuality or gender orientation.

The Problem With Assuming People Are CisHet

Assuming that everyone is cisgender and heterosexual is common in our society. It happens because of something called heteronormativity.

Heteronormativity is the assumption that everyone is straight. That means that it's common to assume that romantic and sexual relationships are always between one man and one woman. Heteronormativity also treats being straight as the only normal or natural way to express sexuality and attraction.

The assumption that everyone is CisHet can make all the people who are not cisgender or heterosexual feel invisible. Everyone deserves to see themselves represented in society, but if you think about it, up until pretty recently most of the people we saw represented in media were CisHet.

By not showing more people who are outside of cisgender and heterosexual identities, harm is caused in two ways. For one, people who aren't CisHet are made to feel as if they don't exist. And for another, CisHet people aren't being exposed to others who aren't like them, so they may not be aware that they exist or are valuable members of society.

If you think about greeting cards, TV shows, billboards, and popular music, you can easily see that the majority of representation in our society continues to be heteronormative, with CisHet as the default norm. This doesn't serve anyone, because, in order for all people to be accepted and receive the rights they deserve, they need to be visible.

How to Be More Inclusive

There is little to be gained in making assumptions about others, but much to lose.

Another way to be inclusive is to participate, in inclusive activities. One example of this is sharing your pronouns. Sometimes CisHet people think they shouldn't need to share their pronouns, but they identify with the gender they're perceived to be. But that puts all of the emotional labor on non-cis people, which isn't fair.

If you are a CisHet person, it's important to remember that LGBTQIA+ people face hardships for their sexual and gender identities. Expanding your knowledge about other gender identities will allow you to be a better ally for those who identify as non-CisHet.

What Is Gender Expression?
3 Sources
Verywell Mind uses only high-quality sources, including peer-reviewed studies, to support the facts within our articles. Read our editorial process to learn more about how we fact-check and keep our content accurate, reliable, and trustworthy. 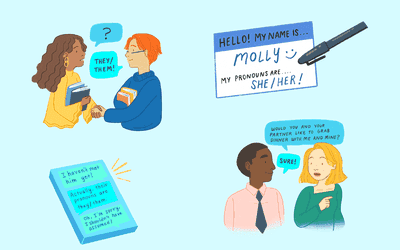