The term androgynous is an adjective and is used to describe someone who is "neither specifically feminine nor masculine" and has "characteristics or nature of both male and female."

Because the word is an adjective, you cannot say that someone is "an androgynous."

An androgynous person may wear gender-neutral attire. They might also present as masculine, feminine, both, or outside of that binary.

The History of the Term Androgyny

The term "androgynous" is believed to date back to the 17th century. It was properly coined as a term to describe the presentation of expressed male and female characteristics in one person in the 1970s, by psychologist Sandra Bem. She felt that androgyny challenged our understanding of gender, and of what masculinity and feminity are; Bem is credited with changing how scholars perceived and comprehended the subject of gender.

Uses of the Word Androgyny/Androgynous

Before we look at the ways that androgyny can present in people, let's look at how we use the word, and how it has changed over time.

The most common way we hear about androgyny is with the term androgynous. It's an identity that a person can adopt to call themself, and it's also an identifier we use to describe those who fit into an ambiguously gendered appearance. People we refer to as androgynous, and people who identify as androgynous, may not be easily identified as women or men. Regardless of their presentation, they might identify as women or men or might be nonbinary.

Androgyny used to be a biological concept that is now known as intersex. Intersex people are individuals born with sex characteristics that are not solely traditionally male or traditionally female.

There has been huge progress made with regards to how society and the medical field treat intersex babies: where once it was the norm to perform surgery to change an intersex baby's genitalia into decidedly male or female, recent years have seen a movement to allow intersex babies to exist as is and to grow into the gender identity that suits them best.

We no longer use the word "androgyny" to refer to the sex of a baby, but we may use it to refer to ambiguous physical features of a person.

How Androgyny Can Present

Someone who uses the term "androgynous" to describe themselves likely possesses the traits of masculinity and femininity. They may be nonbinary, which means they don't identify as binary men or women, or they may not. Someone can call themself androgynous and still identify as a man or a woman; it doesn't have to be a be-all, end-all identity, and it can coexist with numerous other gender identities.

Androgyny presents often in fashion. It wasn't until the 1960s that the term "unisex" was coined in fashion to mean clothing that could be worn by anyone, regardless of gender. Fashion has come a long way since, and androgyny presents in fashion in numerous ways. A man wearing a skirt might be seen as androgynous, just as a woman wearing baggy jeans and combat boots might be. Or, androgynous fashion can also mean that someone wears unisex clothing not meant for any specific gender.

Essentially, androgynous fashion and style are meant to blur the lines of gender. It's all meant to prevent people from assuming that some styles are meant for men and others for women.

A final way that androgyny can present is purely through nature. For example, while some men have qualities we consider "manly," such as being tall and having big biceps, other men are smaller and more petite. Some women are small and have large breasts and hips, while others are tall and have little by way of curves.

When a person falls into the latter category of each, they may appear to be more androgynous, because their bodies or faces don't have the strong markers that we use culturally to identify a person as a man or woman.

Examples of Androgyny in Our Culture

While we may not think that much about androgyny if we ourselves aren't androgynous, we see it represented in our culture quite regularly.

One androgynous and well-known icon is Grace Jones. Boy George was also an example of androgyny, as he wore makeup and had a "feminine" style.

More modern examples of androgynous celebrities include actress Kristen Stewart and fashion model Erika Linder, who was signed by modeling agencies to model both men's and women's clothing lines.

We are still gaining an understanding of gender and gender expression, many people can't seem to completely wrap their brains around those who fall outside the binaries.

Because we are still in the midst of a learning curve about gender expression, people who are androgynous become tasked with educating others about gender roles, norms, and more. They might be asked uncomfortable questions, and they might land in unsafe situations because of it. This form of education is called emotional labor, and it most commonly falls in the laps of marginalized people.

What Are the Benefits of Being An Androgynous Person?

People who are androgynous are being true to themselves in their expression. This can lead to them feeling more internally free than those of us who think we have to conform to society's standards of gender expression and behavior.

An androgynous person might feel more free to allow their identity to change over time, as well, because they are less stuck in the permanent binary that society attempts to impose on everyone.

How to Be an Ally

Androgynous people are not here to be asked about their gender, or to be stared at, or talked about by you and your friends. If you see someone and you can't figure out what their gender is, simply move along with your day.

If you're curious about a person's gender expression, before asking them about it, ask their permission to do that first. Also, understand that a person may decline to disclose this information. If they say "no," please gracefully respect their wishes.

Androgyny is one of the countless attributes that make each one of us unique as humans. You might not understand a person's identity clearly, but that's OK! Androgynous people are a great reminder that gender and gender expression are nuanced and complex, which is part of what makes everyone the individuals we are. 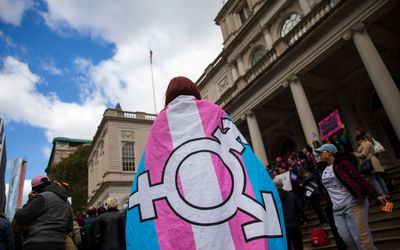 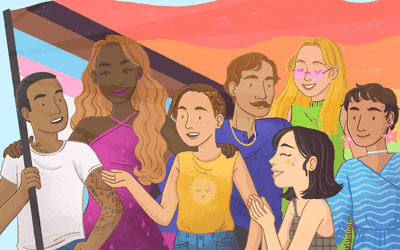