The prevalence of schizoaffective disorder in the population is believed to be around 0.3%, which is less than for schizophrenia or mood disorders. Research suggests that women are slightly more prone to it, but men tend to develop the disorder at a younger age. It is usually first diagnosed between age 16 and 30 and is rare in children.

Individuals with schizoaffective disorder tend to have periods of improvement followed by periods of worsening symptoms.

Whether you have been diagnosed with schizoaffective disorder or are worried that someone you know may have this disorder or has been recently diagnosed, it is important to understand the common symptoms, how a diagnosis is made, and how treatment can help to reduce symptoms and improve functioning in daily life.

Symptoms of schizoaffective disorder tend to be severe and vary for each individual. They can be broadly categorized into depressive symptoms, manic symptoms, and schizophrenia symptoms.

Depressive symptoms of schizoaffective disorder may be psychological or physical. Psychological symptoms include:

Physical symptoms can include:

People with bipolar type schizoaffective disorder may experience mania, which also has both psychological and physical symptoms.

Psychological symptoms can include:

Physical symptoms may include:

Like the other groups of symptoms, psychotic symptoms may also be divided into psychological and physical effects.

Psychological symptoms can include:

Physical symptoms include slow movements or no movement (catatonia) and poor personal hygiene.

While the psychotic symptoms listed above describe how schizoaffective disorder appears to an outsider, it is also helpful to learn what these symptoms feel like to a person with the disorder.

Thinking You Are Being Controlled

You may think you are being controlled by outside forces like aliens, God, or the devil. You may feel someone is inserting thoughts into your head or that your thoughts are being removed. You might also feel like others can hear your thoughts or access them.

You may hear one or more voices that sound real and seem to come from outside you but that nobody else can hear. You might start to talk to them or do things that they tell you to do. In fact, these voices are created by your brain and are not real.

Delusions are things you believe to be true but that are not thought to be real by everyone else. They may begin all of a sudden or form over time. Sometimes they are related to the voices that you hear and seem to explain them in some way.

Most often delusions are paranoid, such that you think people are plotting against you or spying on you. You might choose to avoid those people as it can feel very scary.

Suicidal ideation and behavior can also be a problem for some people with schizoaffective disorder. If someone you know is in danger of attempting suicide or harming another person, stay with that person while you call 911 or your local emergency number. The other alternative is to take the person to the nearest hospital emergency room if you believe that you can do so safely.

There are a number of potential complications of having schizoaffective disorder, including:

Schizoaffective disorder overlaps with other conditions so it can be difficult to diagnose. Sometimes, it is incorrectly diagnosed as simply bipolar disorder or schizophrenia, which is why it is important for mental health professionals to have a full history of symptoms prior to making a diagnosis.

The first step in diagnosing schizoaffective disorder may be conducting a physical exam to rule out any potential medical contributions to the symptoms. Depending on the suspected diagnosis, this may mean undergoing blood testing and brain imaging.

Next, a psychiatrist or psychologist will conduct a clinical interview to determine whether symptoms meet the criteria outlined in the "Diagnostic and Statistical Manual of Mental Disorders" (DSM-5). This includes a period of major mood disorder (depression or mania) and at least two of the following schizophrenia symptoms (at least one of the first three is required):

In addition, delusions or hallucinations most occur for two or more weeks in the absence of a mood episode. The mood symptoms must also be present for most of the duration of the illness.

The Difference Between Schizophrenia and Schizoaffective Disorder

Researchers do not know precisely what causes schizoaffective disorder. However, some propose that it can result from a combination of risk factors that affect brain development prenatally and throughout childhood and adolescence. These include:

People with schizoaffective disorder may also live with overlapping disorders such as attention-deficit hyperactivity disorder, post-traumatic stress disorder (PTSD), anxiety disorders, and substance and alcohol use.

A co-occurring disorder can exacerbate the symptoms of schizoaffective disorder and make a person less likely to follow their treatment plan. This is why proper diagnosis and integrated treatment is essential when it comes to managing and coping with a dual diagnosis.

Schizoaffective disorder is often confused with other mental illnesses, including schizophrenia and bipolar disorder. These are two distinct disorders, however, each with their own diagnostic criteria and treatment. While they do share many symptoms, the main difference is that there is a prominent mood component with schizoaffective disorder.

Genetics, brain development, brain chemistry, stress, and substance use may play a role in the development of schizoaffective disorder. It is also common for people with this condition to have co-occurring mental illnesses such as ADHD, anxiety disorders, and PTSD.

Treatment can help people with schizoaffective disorder to live a more fulfilling life. Treatment may come in the form of medication, therapy, or hospitalization, depending on the particular symptoms.

It's important for people with schizoaffective disorder to continue taking medication even if they feel well, as these medications help to stabilize symptoms and prevent a recurrence of them.

Often, people with schizoaffective disorder need to take medication for the rest of their lives.

Therapy such as cognitive-behavioral therapy (CBT), family therapy, group therapy, or skills training may be used to treat schizoaffective disorder.

During therapy, a person with schizoaffective disorder may learn about their illness, set goals, determine how to manage daily issues, develop skills to interact with others, look for a job, and practice life skills like managing finances, home maintenance, and personal grooming.

Family members can participate in therapy to learn how best to support their loved ones.

In the event of an acute psychotic episode, suicidal ideation, or threats to others, treatment in a hospital may be necessary. There is, unfortunately, no cure for schizoaffective disorder and long-term treatment and management is often required.

However, medication and therapy can help to reduce symptom relapse and disruption to a person's life and the lives of those around them. This is why it is important for them to keep in contact with a psychiatrist to ensure that their treatment regimen is optimal.

Schizoaffective disorder is a serious and lifelong condition. Effective treatments are available that can help manage symptoms, improve functioning, and foster well-being. In the case of an acute psychotic episode, hospitalization may be necessary.

How Schizoaffective Disorder Is Treated

If someone you know is displaying symptoms of schizoaffective disorder, it can be hard to know how to help. While you can try to talk to your friend or relative, you also can't force them to seek treatment. Instead, try offering encouragement and practical advice such as looking up numbers of doctors to call or investigating avenues to receive treatment in the community.

In addition, people with this disorder may be disconnected from reality. In the event that the person is struggling with basic necessities of life such as food and shelter, or there are imminent safety concerns, you can call 911 and ask to have that person evaluated for treatment.

If you have been diagnosed with schizoaffective disorder, it is important to learn to notice when your symptoms are worsening and that you may be entering another episode. Not being able to sleep or feelings of paranoia may be one signal that this is happening. In the event you notice symptoms increasing, it is important to reach out for help as soon as possible from your doctor or other mental health professional. 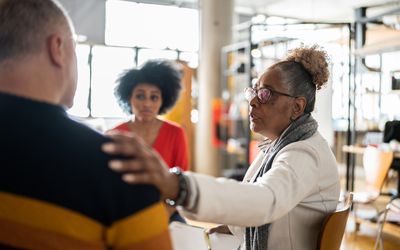 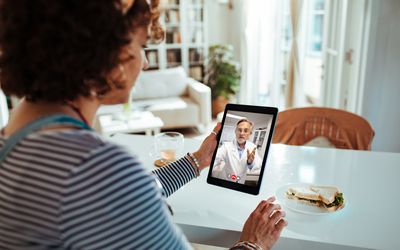 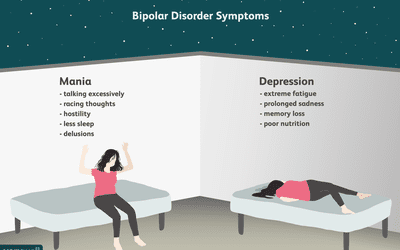