Anna O. was the pseudonym given to one of the patients of physician Josef Breuer. Her case was described in the book that Breuer wrote with Sigmund Freud, Studies on Hysteria. Bertha Pappenheim was her real name, and she had initially sought Breuer's help with a series of symptoms that included visual disturbances, hallucinations, partial paralysis, and speech problems. Breuer diagnosed the young woman with hysteria and later discussed her case with Freud, who developed his own ideas of what lay at the root of Anna O.'s condition.﻿﻿

Her treatment played an important role in the establishment and development of psychoanalysis.

Bertha Pappenheim, referred to as Anna O. in the case history, came to Josef Breuer for treatment for what was then known as hysteria. While caring for her dying father, Pappenheim experienced a range of symptoms that included partial paralysis, blurred vision, headaches, and hallucinations.

During the course of treatment, which lasted from 1880 to 1882, Breuer found that talking about her experiences seemed to offer Pappenheim some relief from her symptoms. She dubbed the treatment the "talking cure."

While Freud never actually met Pappenheim, her story fascinated him and served as the basis for Studies on Hysteria (1895), a book co-written by Breuer and Freud. Breuer’s description of her treatment led Freud to conclude that hysteria was rooted in childhood sexual abuse.

Freud’s insistence on sexuality as a cause eventually led to a rift with Breuer, who did not share this view on the origination of hysteria. "The plunging into sexuality in theory and practice is not to my taste," Breuer explained. While the friendship and collaboration soon ended, Freud would continue his work in the development of talk therapy as a treatment for mental illness.

Pappenheim's case also influenced the development of the free association technique.﻿﻿ Breuer used hypnosis during treatment sessions, but he found that allowing Pappenheim to talk freely about whatever came into her mind was often a good way to improve communication.

Freud himself once described Anna O. as the true founder of the psychoanalytic approach to mental health treatment. Five years later, Freud published his book The Interpretation of Dreams, which formalized much of his psychoanalytic theory.

While Breuer and Freud may have painted the picture that Breuer's treatment cured Anna O. of her symptoms, records indicated that she became progressively worse and was eventually institutionalized. "So the famous first case he treated together with Breuer and which was vastly praised as an outstanding therapeutic success was nothing of the sort," Carl Jung, a former Freud disciple, noted in 1925.﻿﻿

Pappenheim eventually did recover from her illness and went on to become an important force in German social work. In 1954, Germany issued a postal stamp bearing her image in recognition of her many accomplishments.﻿﻿ 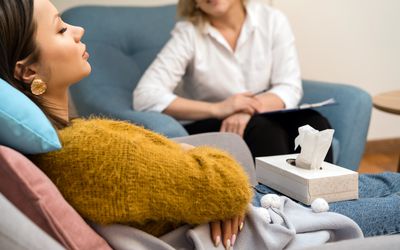